Skip to content
Ruth Family History, Jersey, Just For Fun, Mum, Postcards, RAF July 20, 2015May 21, 2020
Mum has been having a clear out
and The Brainy One returned this afternoon
from dropping off The Boy Child at Granny’s
with a carrier bag full of postcards.
Postcards that I have sent to my parents over the last thirty years.

A random dip into the pile produced a combination
of amusement and blank looks.
Sometime in 1988: {near Christmas, I think,
by virtue of the stamp featuring an image of Santa.}
I wrote lampshades and teeth marks.
That’s it.  Just those four words.
Who knows? 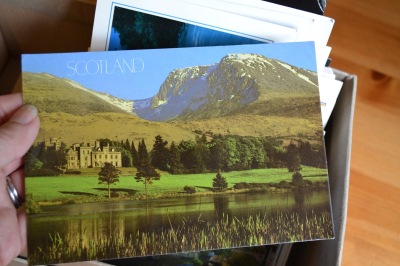 Postmarked 13 April 1987: I went on a day trip
to Jersey in the Channel Islands.
Memorable because I flew there on an RAF Hercules aircraft.
First class postage was 18p.

Postmarked 8 June 1988: I’d just arrived in Germany
at the beginning of what was to become a 4 years 3 months posting.
I’d also timed my arrival to coincide with a four day station stand-down.
My new room mate was nowhere to be seen for those four days
and the camp was deserted because it was the same weekend
as the Rhine Army Summer Show.
I remember it being a very lonely start to what turned out
to be the best 4+ years of my life.

Three things I noticed about this potted history of my life:
My handwriting has improved considerably from when I was a twenty year old.
I went through a stage of not signing my name on postcards, because I assumed {naively/arrogantly}
that the recipient would know it was from me.
I used to drink far too much alcohol, particularly when I lived in Germany.
What would a potted history of postcards say about you?

7 thoughts on “My Life in Postcards”