The Brainy One mentioned in passing last week that he’d won a box of books.  I asked him if they were anything to do with World Book Night (which Mel was involved in) and he confessed that he didn’t really know.

The said box arrived this morning, quite early on, but as it was addressed to The Brainy One, I waited patiently for him to come home this evening.  And, boy, was I itching to get that box open in order to see what treasures lay within! 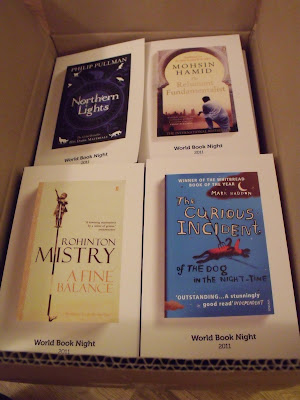 Just look at that!

All 25 titles from World Book Night!  Book lovers heaven!  So now you know what we will be reading for the rest of this year; but fear not, some titles will be offered up here on this blog.  After all, it’s only right and proper that we pass on the titles.

BTW ~ we read The Reluctant Fundamentalist at my book group and the discussion was very lively.  So lively that it almost came to blows and two ladies actually stopped coming after that!  The Boy Child has appropriated Northern Lights because I told him that this story was behind one of his favourite films, The Golden Compass (known in our house as The Polar Bears).

That’s it for now, I off to wallow in a box of books …