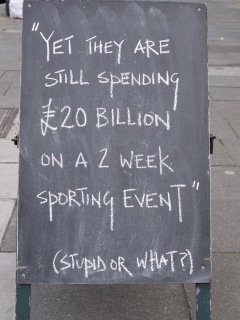 ~ Local opinion ~
The blackboard outside that local cafe is making itself heard again this morning, as you can see.  It’s true that we, as a country, don’t appear to have any money in the coffers, but I think that the point of no return was reached on 6 July 2005, when London was awarded the Olympic Games for 2012.  Now we just have to make the best of it and believe that triumph will overcome adversity. ﻿