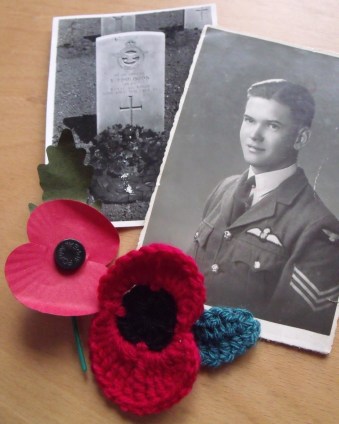 You may recall recently that I blogged about JBPs; today it was my turn to receive one. My uber-talented sister (how many times have I described her as such?) sent me a crocheted poppy, with an accompanying note which read, “just a little something I made while watching TV.”

I have photographed it with one of this year’s Royal British Legion poppies, so you could get a sense of scale.

The handsome young man is Edwin “Ted” Tomlinson, an RAF Pilot who was Killed In Action on 16 April 1945 and is buried in Belgrade, in what is now Serbia. He was just 24 when he died but, in a letter home, he had described himself as the Granddad of his Squadron.

I am not related to Ted but spent my growing-up years knowing about him and the ultimate sacrifice he made for the sake of freedom. He was the brother of our next-door neighbour, a wonderful lady, now in her 80s. She very recently passed this original photo onto me, because she knew that when she was gone and her house emptied, no-one would care about him.